University staff’s working conditions in universities have been deteriorating for years. Now university managers are using Covid as an excuse to deteriorate working conditions further and to cut jobs. It does not need to be this way: these measures can be stopped by staff joining a local union, by staff working together, by involving students and making society aware of how the benefits that universities could and should offer to society has been hijacked by senior managers for their own profit.

Exploitative working conditions for staff, academia has been said to be similar to a drug gang: “Academic systems more or less everywhere rely at least to some extent on the existence of a supply of “outsiders” ready to forgo wages and employment security in exchange for the prospect of uncertain security, prestige, freedom and reasonably high salaries that tenured positions entail.

So what you have is an increasing number of PhD graduates arriving every year into the market hoping to secure a permanent position as a professor and enjoying freedom and – reasonably – high salaries, a bit like the rank-and-file drug dealer hoping to become a drug lord. To achieve that, they are ready to forgo the income and security that they could have in other areas of employment by accepting insecure working conditions in the hope of securing jobs that are not expanding at the same rate. Because of the increasing inflow of potential outsiders ready to accept this kind of working conditions, this allows insiders to outsource a number of their tasks onto them, especially teaching, in a context where there are increasing pressures for research and publishing. The result is that the core is shrinking, the periphery is expanding, and the core is increasingly dependent on the periphery. In many countries, universities rely to an increasing extent on an “industrial reserve army” of academics working on casual contracts because of this system of incentives…

Compared to Continental Europe, what is striking is the much more precarious employment situation of PhD students and teaching assistants, who provide a large part of the teaching of British universities, and whose employment conditions are much more casual than what one can see elsewhere… First, as research is what is most valued, this creates incentives for established professors to retreat from teaching and secure research grants and publications instead, leaving teaching to casual teaching staff. On the other hand, some universities have advertised a number of temporary positions just because of the REF in order to use people’s publications in their submissions. There is no guarantee that universities are going to keep these people once they have “used” them.” 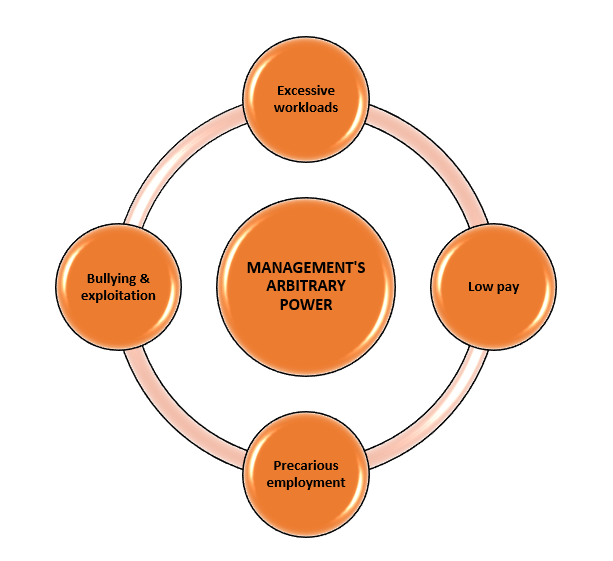 This structure enables the mass exploitation of junior university staff. University management hold all the power over junior staff: they decide who is promoted, who is given a permanent contract and who is left out to dry; and for international staff, this may mean having their right to live in the UK being removed. Junior staff are being increasingly asked to do more and more work with the promise of a permanent, secure position, which may never be offered.

Staff have been asked to mark an inordinate number of essays and give feedback in unrealistic timescales. Staff may be asked to cover the workload of colleagues who were made redundant and may be have their workload increased by management without a corresponding pay rise; the result is that staff may work far more hours than they are paid for. University management also demand that students are “satisfied customers”. This may require lowering standards so that enough students get good grades.

The current higher education system leaves junior staff especially, and staff in general, at the mercy of the whims of management. They are requested to work beyond what is reasonable and what they are paid for just to have the opportunity to be considered for permanent roles or not to be threatened with redundancy. 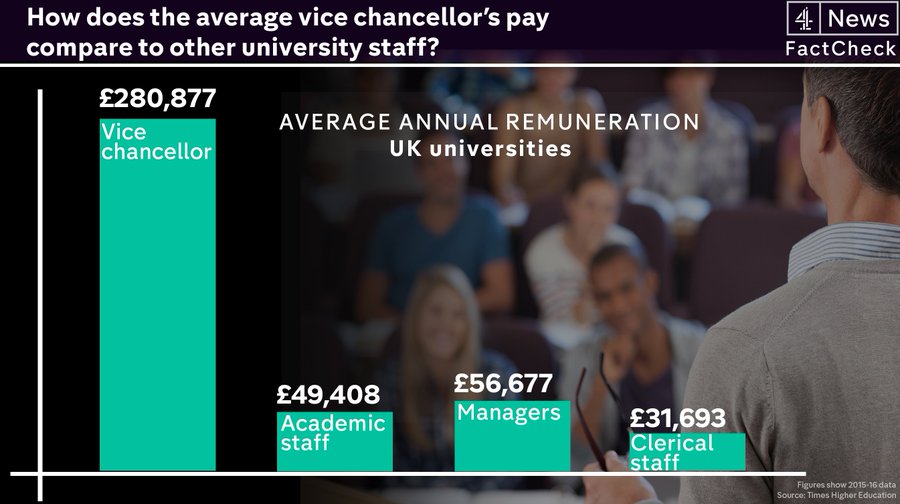 Permanent staff is not immune to the arbitrary power of university management: they are also subject to job cuts and to the increasing deterioration of working conditions. University management has been blaming Covid for the recent job losses and for implementing working conditions less favourable to staff. Covid is not to blame. Management has been cutting jobs for years, including permanent jobs, and has recently used Covid as an excuse to implement further, more drastic, measures.

Job cuts have been going on across the sector for a number of years. Only in 2017/18, there were 900 job cuts across 32 universities (the number of job cuts was higher across the sector). Redundancies were announced and carried out in a number of universities in 2019. Over the last decade, universities have been replacing permanent staff “with cheaper, disposable temporary ones”. This is not due to Covid, but it is a long-term plan by management which is now being blamed on Covid. Here are some examples from 2019, there are more: 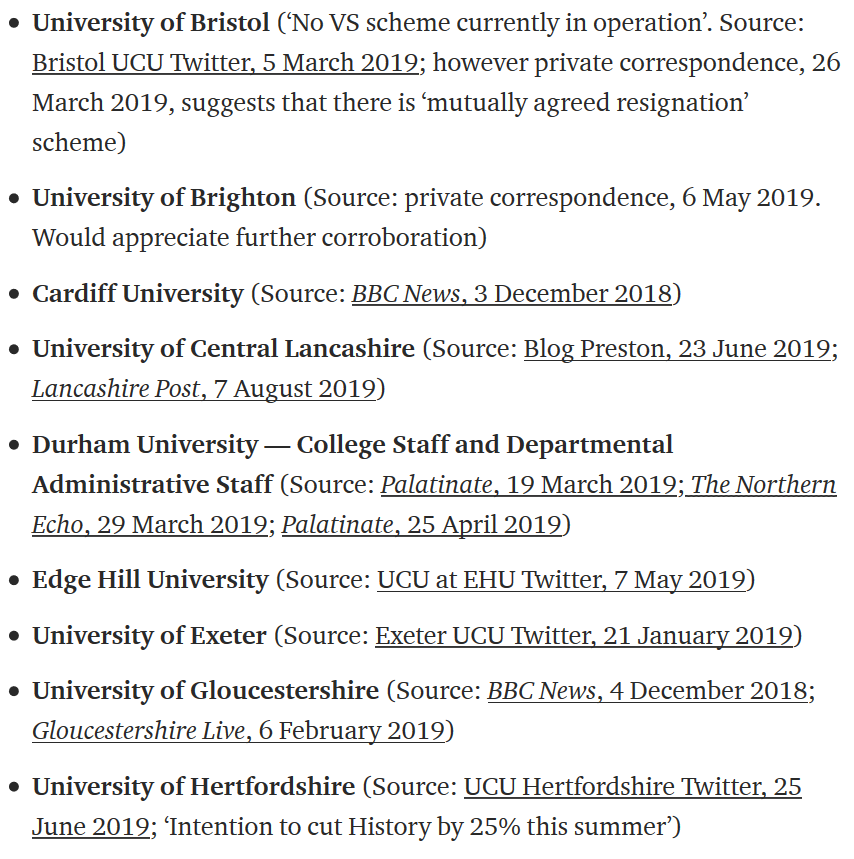 Staff have been used as pawns by management to meet their performance targets and to save university money. Management has been using staff and has no qualms in getting rid of staff when they are no longer useful to their aims. This is not Covid-related: it has been going on for years. It does not have to be this way.

WHY ARE UNIVERSITIES SUPPRESSING FREE SPEECH?

Universities use non-disclosure agreements (NDAs). NDAs are agreements used to prevent information on wrongdoing or corruption to be disclosed publicly. NDAs are agreements that require the person who signs them to keep certain information confidential; the original purpose of an NDA is to prevent commercially sensitive information, such as trade secrets, to be disclosers by employees of a company, especially when changing jobs, so that other companies would not learn about the commercial operations of the first company.

However, NDAs can also be used to prevent disclosure of “uncomfortable” and damaging information, such a sexual misconduct, bullying, discrimination and other types of misconduct.

Why do universities use NDAs?

Universities are known to make extensive (and excessive) use of NDAs. For example, a university used NDAs (as they left their employment) to prevent at least 10 female academics from speaking about sexual harassment by the same male academic, who continued to work at the university.

Besides suppressing important knowledge, the use of NDAs in universities is highly problematic because it allows universities to escape accountability. If there is a known bully, sexual predator or a person committing wrongdoing, universities are able to keep this person at the university without anyone knowing. This means that this person can continue to harm others with impunity, as in the example above.

NDAs are usually accompanied by a payment by the university to the victim of wrongdoing. The university is also likely to spend legal fees in addition to the payment. The BBC asked universities whether they used NDAs and how much they had spent on them. Only two thirds of universities responded and – in total – these universities had spent £87 million over 2 years on staff NDAs (excluding legal and other fees, student NDAs and any payout and compensation that did not come with an NDA).

The use of NDAs by universities is widespread across the sector. It is not a case of one or two universities, but the vast majority of universities use them. 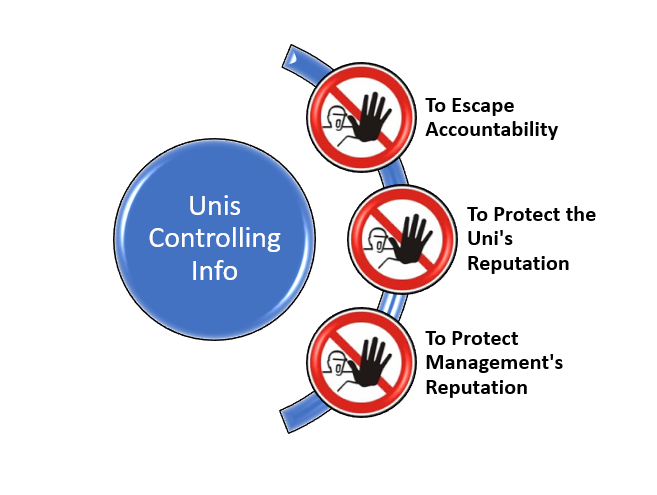 Are universities allowed to use NDAs?

Can universities be prevented from using NDAs to cover up wrongdoing?

It is possible to make NDAs unlawful and/or ineffective when used to prevent disclosure of wrongdoing (as opposed to commercial secrets). In response to the Women and Equalities Committee’ report on “The use of non-disclosure agreements in discrimination cases inquiry” (2019), the government “committed to introducing reforms that would prevent employers from mis-using NDAs”. Although this has not yet happened, it is possible to ban universities from misusing NDAs.

In order to suppress “uncomfortable” information from reaching staff, students and the public, universities routinely threaten staff and students with legal action. For example, when someone makes a complaint of wrongdoing against a member of staff or a student, the university can threaten the complainant with threats of a harassment lawsuit if they disclose what happened to anyone, including friends, mental health professionals and their family.

This threat by the university can retraumatise the victim and can prevent them from receiving professional mental health support and from asking for help to friends and family. Universities have a moral and a legal duty of care towards their students and staff and they doubly breach this by failing to protect them and then threatening them with empty lawsuits.

Universities are also known to threaten staff and students with defamation lawsuits if they share their stories on social media and the media: even if they are telling the truth and have evidence for what they are saying. Universities are controlling the freedoms and the ability of people to speak out, even in their private lives and even after they left the institution in order to avoid accountability for their wrongdoing.

Even on social media, staff are being monitored by universities. In an article in The Guardian, a London lecturer said: “HR was simply trawling the accounts of employees involved and looking for things to object to. It is naked intimidation. They’re constantly watching and trying to drive conversations out of sight”. Academics in universities all over the country are being monitored and face retaliation from speaking out: their career chances may be harmed or they may even be fired.

Once again, these threats happen in many – if not all – universities. All these “threats” and the monitoring of people’s social media is expensive for universities: they need to pay people who spend their time checking through staff’s and students’ Twitter and Facebook and they need to pay lawyers to write legal letters. Money spent on this is money that could – and should – be used to support teaching and research.

If you want your university to stop wasting funds on wrongdoing and on suppressing free speech and have more money for research and teaching, for pay and pension, for support services, universities need to be held accountable on their actions and how they deal with corruption and wrongdoing. Staff, students and society must be able to access information on how universities are managed and the problems within universities and how – of if – they are being properly addressed. 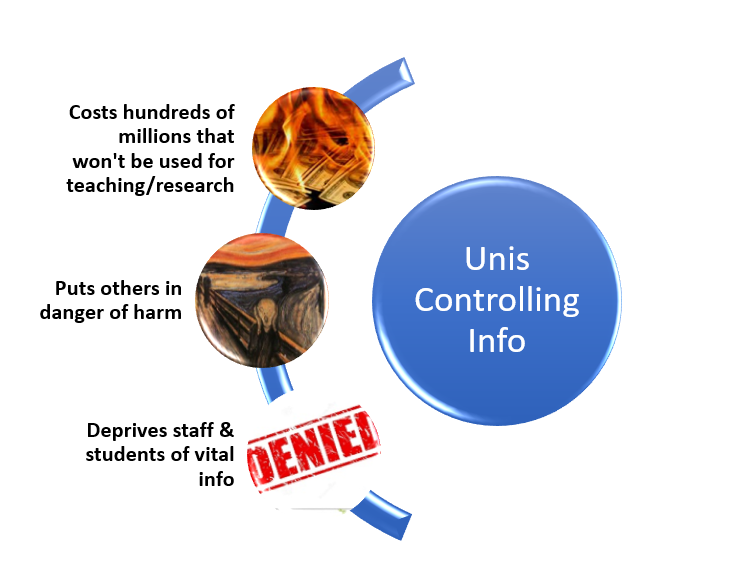 WHAT CAN YOU DO TO IMPROVE STAFF'S WORKING CONDITIONS?

February 2019 – a bleak month for the UK Higher Education sector

The use of non-disclosure agreements in discrimination cases inquiry